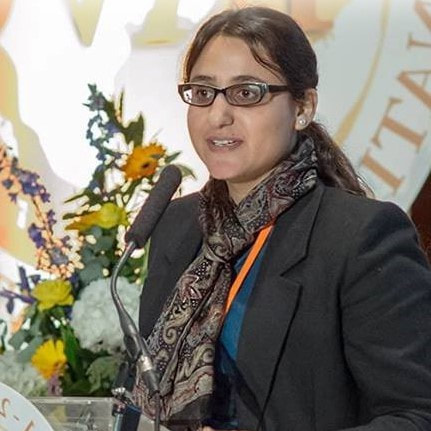 Sheis an Ayurveda academician and Researcher, working in Ayurveda field since 2006. At present she is Assistant Professor of Ayurveda at CBPACS, under Government of NCT of Delhi. She has a vast experience in India and abroad for propagating evidence based Ayurveda. For propagation of Ayurveda she has visited Latvia, Germany, London, Dubai and Malaysia, Brazil & Caribbeans. She was invited by Embassy of India for Latvia & Sweden, Embassy of Germany, Embassy of Sweden, Ministry of Health of Brazil, for promotion of Ayurveda. As a part of the campaign to promote Ayurveda, she participated in the dialogue with various prominent doctors, oncologists, academicians & regulators from Ministry of Health of various countries. She is author of an Ayurvedic book on Yoga Chakras and its relation to Ayurveda. She has presented and/or published over 35 papers at national and international Journals. Dr Pooja Sabharwal is engaged in extensive research in the field of integrative oncology & epigenetics through Ayurveda . She is part of two projects related to integrative oncology. She has received National Human Rights award from All India Human Rights Association & Ayurveda excellence award from Union Minister of Communication. She has been International coordinator for various International Ayurveda conferences. She is associated with various international associations as Ayurveda academic/research adviser. She worked as Consultant/Assistant Medical Superintendent at Shri Dhanwantry Ayurvedic College and Dabur Hospital Chandigarh. She has also served as Ayurveda consultant in Germany on deputation From Dept of Ayush , Ministry of Health and Family Welfare , Govt of India.she has written a book on Epigenetics & Ayurveda . She is founder and president of Arbud Ayurveda research based union for development in oncology ! She is deputy chairman of international ayurveda research network , she is Adviser to Malaysian Ayush society, India.

Abstract: There is an old saying in Ayurveda that goes, “what you see, you become.” It’s an ancient take on epigenetics. If your environment can change your genetic expression, then it seems wise to surround yourself with a healthy environment rich in peace, love and joy rather than stress, violence and exhaustion. Ayurveda is the study of life science. Ayu – meaning life and Veda – meaning science or knowledge. This science has been witnessed and practiced for 5000 years since the ancient Vedas were written. Ayurveda believes that the origin of disease is rooted in one key phrase, “Forgetting our true nature as spirit.” This can be further explained by understanding a little bit of Sankhya philosophy. Purusha desires to know its own nature and merges with Prakriti. What unfolds is the creation of the individual soul. It is believed that disease unfolds when a person forgets their true nature as spirit. This happens at every incarnation. At each incarnation there is a storehouse of karma that is stored in the causal body. When incarnation occurs the ahamkara takes form into an astral body where disturbance originates.